Documentaries That Pull Back the Curtain on Big Oil

Documentary films are at the forefront of the climate change debate, conveying powerful stories and images of environmental destruction that help viewers understand what’s at stake far better than most policy debates can. Media Impact Funders, The 11th Hour Project and Philanthropy New York convened a session to help funders learn more about how a trio of high-impact productions—Virunga, Gasland and Gasland Part II—are influencing viewers, shaping media coverage, and moving policymakers to action.

MIF Executive Director Vince Stehle moderated the conversation, observing that documentaries have helped to both move viewers to action on environmental issues and to highlight the need for debate. He likened the discussion to a “master class” in different ways to evaluate related outcomes.

Check out our live-stream of the event here:

The video has some sounds issues, especially in the beginning. Below are timestamps indicating when specific speakers begin their presentations so you can navigate through more easily.

The first half of the event examined the outreach campaign for Virunga, featuring insights from funder Lauren Davis, the program manager for The 11th Hour Project; Joanna Natasegara, the film’s impact producer, and director Orlando von Einsiedel. An initiative of the Schmidt Family Foundation, the 11th Hour Project supports programs that reveal the human impact on the world’s interdependent living systems, with a particular focus on climate, agriculture, and human rights.

Davis called Virunga just one piece of the urgent and “ever-growing fossil fuel story.” The film documents how a small and embattled team of park rangers protect Virunga National Park, one of the world’s most bio-diverse places, and home to the last of the mountain gorillas. Located in the eastern Congo, this UNESCO world heritage site faces multiple threats from armed militia, poachers, and one company, SOCO International, determined to extract natural resources from the region.

Eisendel explained that while he initially wanted to tell a positive story about the park, within three weeks of filming, civil war broke out. With the help of the rangers, the team began conducting undercover investigations of SOCO officials, risking their lives to capture damning hidden camera footage.
Natasegara detailed how the film’s campaign has already held corrupt officials accountable, and generated donations to help preserve the park’s delicate ecosystem. The team has been particularly effective in encouraging investors to eliminate SOCO International from their portfolios. They will continue to target high net worth individuals and corporations, and are planning to take the film to next year’s World Economic Forum.

The team is also working with Human Rights Watch to demand investigation into government corruption and SOCO’s efforts to drill in the park. In April, Park Director Emmanuel de Mérode was shot and badly wounded by three men in military uniforms who have yet to be identified.

“We’re not done yet,” said Natasegara. “The park is not protected.” To see Virunga for yourself, find screening details here, or watch it on Netflix. 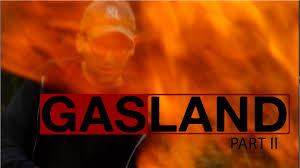 The dangers of fracking now regularly make headlines, but it took the vivid imagery of the 2010 documentary Gasland to introduce the term into public debate. With Gasland Part II, Director Josh Fox used his trademark dark humor to take a deeper look at the dangers of hydraulic fracturing, challenging industry claims that natural gas is clean and safe and revealing how oil and gas companies are, in his words, “contaminating our democracy.”

The second half of this session examined how the film has shifted the frame of the debate, and the success that the related campaign has had in encouraging grassroots organizers to demand further regulation.

Diana Barrett, the president of The Fledgling Fund, spoke about the foundation’s investment in the film’s outreach campaign. It is important that funders support multiple projects tackling the same issues from different perspectives, she said, because documentaries have “a tremendous additive effect — no one product can change the debate.” Flexibility in funding is also key, she said, because sometimes opportunities arise in the news cycle that serve as levers for documentaries to move viewers to empathy and action.

Harmony Institute Executive Director John Johnson spoke about his research into how the first Gasland film affected media coverage and online debate. See his presentation here, which details the role of documentary in shifting coverage of the issue into a public health frame, and introducing a resonant meme: the burning faucet as an indicator of fracking’s danger to communities. Johnson’s research also shows how coverage of the film led to increased information seeking about fracking across the web.

MIF Research Director Jessica Clark presented highlights from the Gasland team’s barnstorming outreach campaign revealed in this case study produced for the Media Impact Festival. She noted that the campaign has since morphed again. Fox and his team are currently producing the Solutions Grassroots Tour, which combines film, live music, and theater to rally communities to adopt renewable energy sources such as wind and solar.
Curious to learn more? See Philanthropy New York’ Storify from the session.